Ask a child what their favourite colour is and they’ll usually answer with a bright or primary one! Children love to inhabit a world of vibrant primary colours from which they draw and give energy. They won’t say “beige”. So why do we give them fifty shades of beige on their plates? 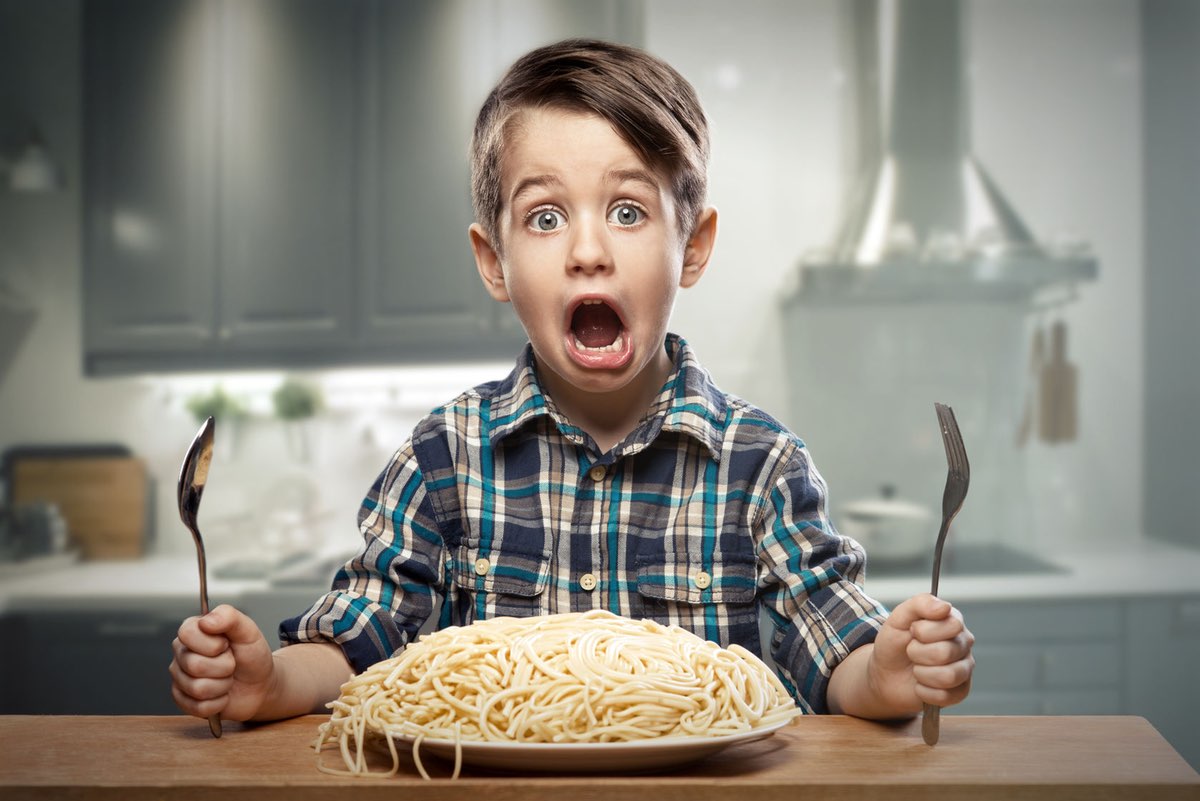 Beige food is everywhere, from breakfast cereals to muffins to biscuits and crisps. It’s all beige beige beige. And for children’s food it’s seen as ‘safe’ and the calming colour of tantrum avoidance. Tea plates are a gradation of neutrals achieved with pappy white bread, margarine, cheese so mild it tastes of nothing but fat, a few anaemic-looking cocktail sausages and a pop of colour with the cheese puffs. All served up on red plastic plate with no cutlery, because kids love brightly coloured things and teaching them to use a knife and fork properly complicates things.

This beige ‘safe zone’ is propagated by many UK restaurants where children are automatically handed the kids, or ‘kidz’, menu. Choices are along the following lines:  pasta with tomato or cheese sauce, cheeseburger with Smiley Faces, chicken nuggets, fish fingers or (suspect) sausage and mash. This is inevitably followed by the standard ice-cream choices of strawberry, chocolate and vanilla. How then do we expect children to cross the Rubicon from Smiley Faces to potatoes dauphinoise, or even good old fashioned mash, let alone anything green?

I naively started out on that parenting rite of passage called the playdate believing that our guests should go home smiling and with full and happy tummies. I went for the failsafe options but I wasn’t ready for the wall of negatives. Some didn’t want ‘red sauce’ with their pasta, just pasta with grated cheese; some wanted pizza but with no cheese on; some didn’t like pasta or pizza at all and stared gloomily and tearfully at their plates. God forbid if we ventured into the Nomansland of meat that wasn’t a sausage, fish without the finger, or *lightning strike* vegetables.

As time went on I became more thick skinned. Amongst a fridge magnet set of Shakesperian insults (‘insolent degenerate strumpet’ being a favourite) there’s one I now pull out at the first sign of a complaint, it says:  Today’s Menu – Eat It Or Starve. I love its conciseness and it nicely sums up my no-nonsense approach to meal times. That’s not to say children can’t have a bit of junk sometimes, of course they can but by constantly giving children a small range of the foods they won’t kick up a fuss about we’re breeding a generation of food fearers.

UK versus the rest of Europe

Is it just us in the UK who give our kids ‘vanilla’ diets though? Other European countries seem to have it cracked right from the off, their children don’t have a Rubicon to cross because they were born already on the other side.

When I worked as an English assistant in France I was bowled over by the quality of the school lunches in the rural collège where I worked. Every child’s meal was accompanied by deliciously dressed salad, the addictive carottes râpées and nuggets of melting Brie.  There was no dumbing down at all as evidenced by the cervelle d’agneau on offer on several occasions (lamb’s brain – imagine *that* playdate scenario!). The pupils were always genuinely excited about what lunch held in store.  Staff tables were graced by a ‘pichet’ of wine. Staff and pupils shared meals in the same room. This wasn’t an affluent area but the value of good food was placed above lesser things.

In contrast UK schoolchildren are largely dished up a diet of processed beige which is delivered by a lorry each morning and served on plastic plates with compartments and can often be eaten without cutlery. Staff and children eat separately, everything is rushed. Packed lunches aren’t much better, with white sliced bread sandwiches, crisps, sweet bars and sweetened juice, maybe a token bit of cucumber or a few cherry toms.

As a nation we spend a tiny fraction of our annual income on groceries, we value Sky TV and mobile phones more than spending on decent real food, and yet Sky TV isn’t going to make our children live longer and more healthily, good food is far more likely to do that. Besides which, good food does not have to be expensive.

Food and eating education abroad and in the UK

Brussels has its own non-profit organisation whose sole aim is to provide an education in taste for school children. It’s called ‘SAPERE’ which comes from the Latin ‘to know’ and ‘to taste’.The SAPERE method teaches children to tune in to all their senses while eating. They learn the following: identification of flavours and the role of taste buds, recognition of dominant tastes and experimentation with mixing flavours, to explore the olfactory memory, the importance of the visual and of colour, the significance of touch and of hearing in the tasting process, the role of chewing and experiencing the food and an introduction to cultural diversity through trying regional specialities.  The lessons often end in a shared meal enjoyed by the whole class.

The children develop a rich vocabulary to describe foods and a deep appreciation of all aspects of eating. We as parents can do this with our own children, it’s important to teach them how to enjoy food, for instance when eating with them, which it’s always good,  we can help them explore flavours and sensations. For instance “Try a little bit of this with a bit of that. Mmmm, it’s so nice, I love the way *this* is crunchy and *that’s* creamy!” By showing that we enjoy food and by making it a happy, natural and calm experience we can help our children have a great love and appreciation of good food, a life skill. The SAPERE method is seen a long term investment which will bear fruit as citizens are able to take care of their own health.

The idea of learning about food at school started in France in 1974, the same time we were sampling the heady delights of Findus Crispy Pancakes, Brains Faggots and Angel Delight in the UK,. It was led by Jacques Puisais, a ‘Taste Philosopher’ who trialled taste education classes in French primary schools.

Currently in France all 9-10 year olds receive food education; in Holland, Finland and Sweden it’s  taught to all pre and primary school children, and in Switzerland it’s open to all in primary. Sweden followed France and has done it for more than twenty years (those progressive Scandis again) and teachers are specifically trained in the method.

In the UK there’s very little, or no, food education for primary school age, and secondary school food tech sees them bringing home pineapple pizzas, fairy cakes and bland white pasta bakes. Parents are often too rushed to cook with their children or too rushed to cook at all. Groceries are bought online to save time, so children never get to learn how to choose a good apple or potato or to test if something is ripe. Families are scattered, so grandparents are often not closeby to pass on traditional cookery skills either. Parents are more likely to watch a cookery programme with their kids than actually cook dinner with them in the evenings.

Vital role of parents and family

Shared family meals are a thing of the past with after school activities most nights or one or both parents working late. Adults aren’t eating well, let alone children; food and shared eating is way down the priority list yet it’s a fundamental part of life and health. Better that children are brought up to eat well and share conversation than get a black belt in Tang-Soo-Doo?

The way parents eat is usually the way children end up eating and it follows that if parents overeat and are overweight their children will be too. We owe it to our children to give them good health; making them overweight and obese is a cruel infliction, physically and often mentally as well. The number of type 2 diabetic children is hugely on the rise, as well as adult type 2. Type 2 diabetes is linked to overweight and obesity. Diabetes is a very serious disease.

The process of learning taste does not start at school or at home though, it starts in the womb itself as amniotic fluid and breast milk absorb flavours and nutrients from the mother’s diet (to this day I query whether one of my children’s love of pickles stems from a severe pregnancy craving for Monster Munch).

In the womb, babies have an initial preference for sweet tastes as this signifies density of calories. The initial dislike of bitter or sour flavours is an inbuilt protection concerning something that may be poisonous or toxic.

Research, and frankly not even research but plain old-fashioned parenting, has shown that tastes can be widely expanded while sensory development is happening. Repeated positive exposure is key at this stage. Yes it can be tedious offering a child broccoli (trees) over and over again only for it to be squidged into the corners of a high chair, but it can take up to 15 repeats before the acceptance of a new food.

Subtle psychology comes into play too. Things like “You can’t leave the table ‘til you‘ve eaten all your peas,” or “You can have ice cream when you’ve eaten all your dinner,” end up making the focus food or meal that MUST be eaten appear negative i.e. once you’ve held your nose whilst shovelling in those nasty peas, you can look forward to the main event of luscious ice cream.

As with everything, there are exceptions. I was a product of the 1970s and 80s UK culinary wasteland and didn’t really get to grips with any ‘exotic’ food until my later years. On a recent holiday 9 and 6 year old were coaxing me into trying soft shell crab.  While being a huge fan of seafood this was a bit too ‘bush tucker trial’ for me and I was suitably admonished by my own children as they crunched on the crab legs hanging out of their mouths.  “My work here is done”, I thought.

How we can change things

We still have a considerable way to go compared to other cultures but progress can be made if we make the effort to feed our children a great variety of good real food; teach them how to shop for good ingredients, how to cook, how to eat, how not to overeat, how to share the love of a good meal and the conversation that goes with it.

Our children can sing and, indeed, eat a rainbow if we can help show them how.

Get the whole family eating well and loving it, with the Nutrition for Families plan!

Cover photo by arturkurjan from 123rf.com.