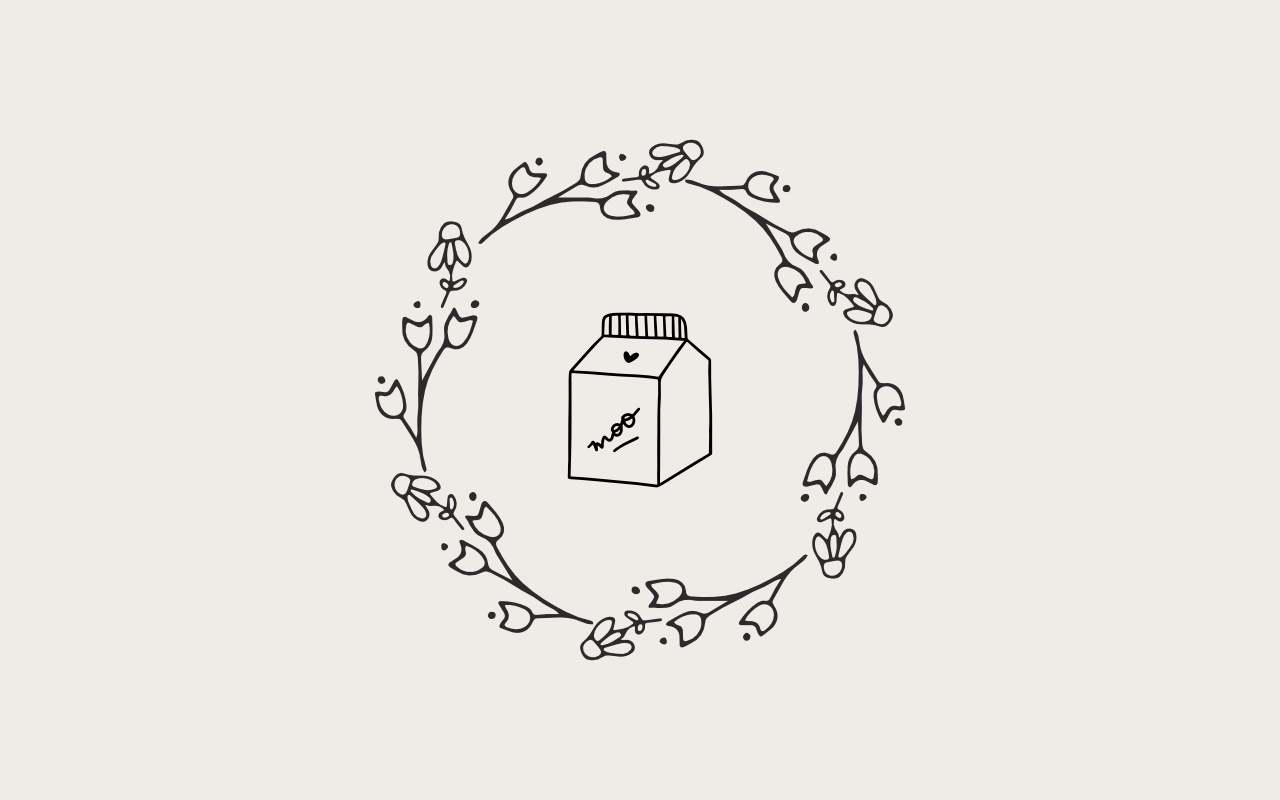 Before you read the rest of this please be aware that what I’m going to tell you about homogenised milk is controversial and that the original theory (referred to in this article) has been refuted by subsequent studies. This post is simply to stimulate thought and discussion.

Why is homogenisation even a thing?

It’s thought that people don’t like to see the cream on top of milk, or clinging to the carton, as it would naturally. And apparently people don’t like seeing creamy coloured milk, they like it to look whiter (can’t think of anything nicer than creamy-looking milk).

We think all foods are best eaten in as near to their natural state as possible which is why unhomogenised milk is a better option.

People are actually scared of whole milk; when they become a member on the Nutrition for Everyone plan they’ll often email me and ask if I’m absolutely sure they can have it. Can they not have soya milk instead or some other milk-like liquid made of locusts, nuts, rice or ground-down amaranth flown all the way from Peru or something. I have the most hellish job persuading them to simply enjoy real milk. Like getting people to drink arsenic.

Our weekly healthy eating plans, from £20 a month, will get you drinking proper milk, whole and unhomogenised.

A scientist called Kurt Ostler studied healthy and diseased arteries for twenty years and concluded that heart disease increased in the 1940s at the time of widespread milk homogenisation (incidentally consumption of vegetable oils increased around this point too). Although humans in many parts of the world have drunk milk for 10,000+ years heart disease markedly rose when this process was introduced.

Ostler looked closely at the action of a substance called plasmalogen, which forms part of the membranes surrounding heart muscle cells and artery walls as well as playing a role in the immune and nervous systems.

Ostler looked at the relationship between plasmalogen and another substance, Xanthine Oxidase (XO). XO is made by the body but also found in milk; however, XO and Plasmalogen are not naturally found in the same place in the body – XO changes plasmalogen and appears to destroy it. Remember that plasmalogen helps make up the membranes of artery and heart tissue. Therefore destruction of plasmalogen damages these tissues and leaves the artery walls in such a state that plaque build-up is more likely.

Ostler’s theory about homogenised milk and heart disease was that during homogenisation XO particles become so small that they bypass the digestive process and pass unnaturally from gut to blood vessels, thus introducing XO into the vessels, destroying the protective plasmalogen and paving the way for lesions and plaque build-up. Did you know that plaque build up more easily on damaged, roughened surfaces? Thats why you don’t really want stuff flowing through the vessels that’s not meant to be there.

So if Ostler was right, and there’s certainly a lot of discussion around his theory, drinking homogenised milk may contribute to damaged artery walls, allowing plaque to ‘cling’ more easily. Whether he was right or wrong it’s a pretty tasty experience drinking unhomogenised milk, when you can get it.

Related article: What is inflammation?

We’re always hearing that inflammation is bad for our health and that we should be eating more anti-inflammatory foods, but what IS inflammation, exactly?

So what can you do?

Just drink unhomogenised, preferably organic, milk whenever you can get hold of it and if you want to – choice is always a ‘thing’. Milk from cow’s who eat grass too – that’s what cows are meant to do. Problem is the law doesn’t force manufacturers to say on the packaging whether the milk is homogenised, so it’s hard to tell until you get your eye in. But most milks sold in supermarkets are homogenised, with a few exceptions listed below – check the labels though as some of these companies also produced homogenised versions.

We have lots of beautiful recipes using gorgeous whole milk, like this creamy rice pud that any Grandmother would approve of (you wouldn’t find many grandmas drinking milk made out of nuts you know, they know better!)

What about ‘full fat’ milk though, isn’t that bad?

Whole milk contains more Vitamin A and Vitamin E than semi-skimmed and skimmed, which are just watery poor cousins of the real thing; skimmed has to be fortified with vitamins that are no longer in it because the fat has been removed – crazy. Channel Islands Milk comes in at around 4% fat because it retains the cream that would normally be skimmed off whole milk for other dairy products – and it is BEAUTIFUL.

What about the animals

Now this I have huge sympathy with. The dairy industry can be one of the cruellest. If people find it abhorrent then yes they are free to not drink milk, of course, fully support that. But if you have fewer qualms about that side of it the follow my advice in the rest of this article, but do seek out organic milk where animal welfare standards are higher.

But we weren’t designed to drink milk from other mammals!

Maybe not, but the success of the human species is down to our fantastic ability to adapt and evolve to use the foods that are available where we live. Thus, about 10,000 years ago humans from northern Europe (if you’re in the UK that’s you) underwent a genetic mutation that meant they produced lactase, the stuff that means we can digest milk. Hey presto, fabulous source of nutrition. A tiny percentage of the population from this region are lactose intolerant, less than 5%. 95% can drink milk with no problems at all, and with huge benefits.

Hang on a minute, I am allergic to milk

If you have a medically diagnosed allergy to milk – lactose intolerance – then of course you should not drink milk, that would be silly. You can now benefit from the miles of supermarket aisles of nut, soya and rice milk – hurray! Every cloud. Go for fortified ones though, otherwise you’ll be missing out on iodine. calcium and B12.

If you don’t have a medical diagnosis, get one before you cut milk and dairy from your diet. TV and radio programmes, newspapers, mags, friends and social media are not reliable diagnostic tools. Read about food intolerances.

By the way, here’s the reply I sent to an email asking me about this article:

Firstly, studies have been inconclusive about the effects of homogenisation on absorption of xanthine oxidase and subsequent degradation of plasmalogen (plasmalogen helps to form cell membranes). The theory that homogenised milk is a factor in cardiovascular disease is controversial. My own recommendation is to drink non-homogenised milk so that the question doesn’t have to be considered.

To encourage and support healthy cell membranes it’s important to eat a diet that is rich in fat-soluble vitamins and Omega 3 fatty acids. It’s all about balance and moderation. So if you drink unhomogenised milk and butter that’s made from it but you have an overall healthy lifestyle and varied whole food diet you are taking a great approach.

It’s difficult to be ‘perfect’ with everything we eat and drink, and as I said, this one is still out to the jury.

PrevPreviousThe importance of knowing what to eat during pregnancy
NextHill running. Benefits and technique.Next