Where does weight and fat actually go when you lose it?

Get your science specs on!

Someone asked me this recently, and it’s a really great question. Does fat literally melt and ooze out of our skin? Does it come out of anywhere else?! Or does it just burn up and disappear? 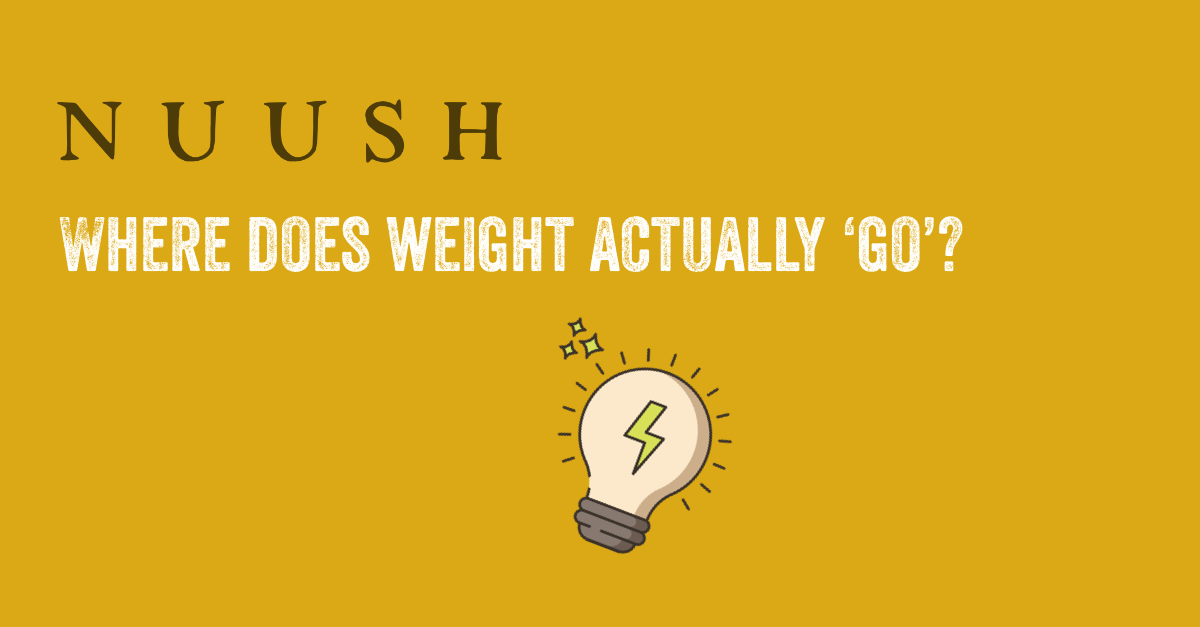 Well, when you lose weight it’s not just fat (but I’ll come to that in a minute), it’s also all the supporting vessels that live in fat, the many miles of capillaries – one pound of fat has about 7 miles of capillaries – and the nerve cells that are needed to tell the fat cells when to store and when to release their booty.

All these things have weight as well as the fat cells themselves and their contents. Alongside that you will need less muscle because there is less of you to move around; muscle is very heavy with blood water, muscle tissue, dense capillaries, nerves and so on.

So part of the weight loss comes from having less body tissue.

But where does the actual fat go?

Fat molecules are made up of oxygen, hydrogen and carbon dioxide atoms. All atoms and gases have weight even if you can’t see them. Think of dry ice, which is crystallised form of the gas carbon dioxide – it’s carbon dioxide that you can see and hold and experience the weight of. All the gases in the air we breathe, and that surrounds us, have weight and exert pressure on our bodies, its just that we’re used to it so we think there’s nothing there pressing on us!

When we eat fewer calories than our bodies need the energy has to come from inside us instead, stored energy. A ready source of energy is fat, because we store so very much of it. While carbohydrate stores run out within a day, fat gives us five months or more of stored energy! Think about it, if you’re 140lb and 25% of you is fat you store 35lb of fat. Each pound of that stored fat provides 3,500 calories, calories that are pretty easy for the body to turn into energy.

This energy is needed by each and every one of the trillions of cells in your body, they need energy to carry out their tasks – and believe me they are busy-as, ALL THE TIME. So fat in the form of fatty acids is taken to them by the fluid that surrounds cells, or is first converted to glucose, and literally ‘eaten up’ by them.

In this life nothing actually disappears, it’s only changed into something else.

So as I said, fat molecules are made of hydrogen, carbon dioxide and a bit of oxygen. But in order for your cells to make it into energy they need a lot of extra oxygen to process it – think of fanning the flames of a fire, in fact they need thirteen times as much oxygen than they already have. Luckily we have this magic way of getting it to them and it’s called breathing in. That extra oxygen comes from breathed air. The cells are then happy because they can ‘eat the fat’ and in the process they break it down into its component parts.

Just like when we eat food and some of it comes out of the other end as waste. We then breathe out the carbon dioxide, literally breathing out weight. The remaining oxygen and hydrogen are converted to water (H2O), which we then lose in all the normal ways, i.e. going to the loo, perspiring and breathing out water vapour. Water is heavy as a heavy thing, think of the weight of a dry towel and a wet towel to visualise how much water weighs – a hell of a lot.

Each of our trillions of body cells needs energy to do its work. Some of that energy comes from fat.

Fat is made of hydrogen, oxygen and carbon dioxide, which all have weight even if you can’t see them.

Our cells ‘burn the fat’ and spit out its waste products which we then eliminate from the body in our breath, on the loo or out of our skin.