How to make pancakes, and where did they even come from, and why? 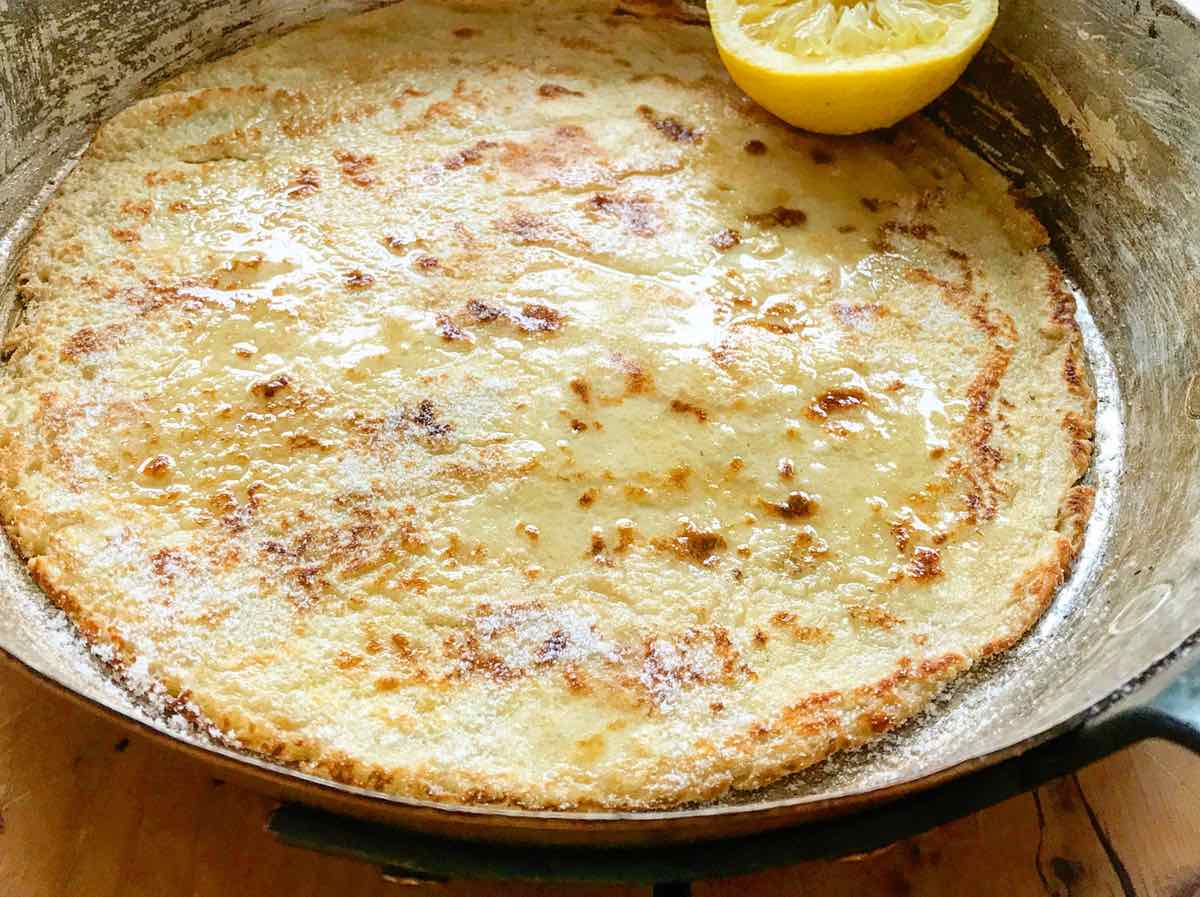 Like coming home from work of a Tuesday night and immediately being faced with the pressure of producing a stack of thin, hot, golden discs of utter perfectness and presenting them on a perfectly laid table with a ubiquitous Cath Kidston tablecloth. and one of those old fashioned pastel-coloured radios, alongside some early daffs, without cussing to high heaven “Oh drat these bothering pancocks!” and filling the house with acrid smoke.

I’m not sure I ever really learnt how to make pancakes properly when I was small so I’ve kinda made it up as I went along for yonks.

Want to cut straight to the recipe without gaining a degree in the history and nuance of pancakes? It’s here

It’s only been in the past 2-3 years that I’ve got on top of my pancake game and realised that producing a perfect stack is an urban myth, they need to be cooked with the consumers hovering eagerly at your shoulder then slid onto outheld plate as you turn back to the cooker to do the next one. So I will tell you how to really make pancakes, in real life, without the pressure of Instagram perfection.

A brief history of pancakes

So first, yes, let’s look at the history of pancakes. Would you believe that, despite what paleo dieters say, cave people ate pancakes that weren’t made out of avocado and protein powder? This has delighted me no end. Instead they were made from flour and water and possibly cooked on hot rocks rather than 6-ring stainless steel cookers (I mean if yr gonna ‘paleo’ then paleo properly, on rocks ‘n’ stuff). The flour was ground from bullrushes and ferns rather than wheat (expecting all Paleo’ers to run off and spear some bullrushes now), but Einkhorn wheat soon enough appeared and other wheats followed and the wheaty-pancake became pretty much omnipresent across the world from Ancient Greece to France to India to the American colonies, to basically everywhere.

There actually isn’t enough room on this blog for me to list all the world’s pancake names, it’s endless and wonderful!

Fun fact: The town of Olney in England has held a pancake race every year since 1445. Only females compete and the prize is a kiss from the verger.
*Moves to Olney immediately*

How to make pancakes work for you in many different ways

Pancakes have always been surrounded by ritual. In Medieval times a pancake was pinned to the door to ward off evil spirits and disease (it was probably one of my old ones), in Rome the winner of a fight was decided by whose pancake stuck longest to the opponent’s skin when thrown at him. When Christianity started, the cracking of eggs into flour was seen as a sign of fertility, with the egg representing the woman, the flour the man, and the milk the babies that bound them together, apparently. In France pancakes were used to dress wounds during massacres; and back in the day it’s said that British monarchs draped a cold pancake over their face to keep the sun off, I really like this idea actually. By the way, I found these snippets from that posh mag, Tatler.

But why do we Brits eat pancakes on one certain Tuesday each year?

It’s all about Lent. So Lent is a Christian thing and is about giving up fripperies for about six weeks before Easter, maybe doing some fasting and repenting of sins. Pancakes with lemon and sugar are obviously highly sinful, and they’re a good way of using up all the eggs, flour and milk before doing penance, so they fit the bill perfectly. Plus we all know that once you’ve had a stack of pancakes you pretty much can’t move for about six weeks anyway. Except these days people mainly just give up chocolate or wine for six weeks and carry on eating *all* the food and pancakes (but sans Nutella) at will, but that’s for another blog so don’t get me started.

And then there was The time Jesus’s face was seen in a pancake.

To be honest I could go on all day about pancakes

But I’m going to leave this here instead. It was the fabulous response from facebook friend and ex-colleague Neil Ellis when I asked everyone about their pancake-making techniques.

Of course the French use buckwheat for their crepes/galettes, and the Russians use it in Blinis … but it is not grass, despite its name: it’s related to rhubarb! It’s quite high in protein and essential amino acids too. So could be useful for gluten intolerance/caeliac sufferers, along with potato starch (potato ‘flour’), gram (pea) flour (highr protein than other flours), and cassava root flour ( a bit like potato flour, but needs cooking longer to denature some proteins that don’t suit us – save it for the tapioca pudding…). I’ve tried ’em all… buckwheat is best, no gluten and a good dollop of protein.

Usual method. Make a volcano of flour in a bowl, eggs in the crater, stir in, gradually incorporate flour into eggs to make a paste along with some of the milk so it is not too stiff (ahem!), then drizzle the rest of the milk in gradually whisking all the time (add a touch of salt even going sweet) until the batter resembles cream somewhere between single and double – closer to single. Add some melted but not very hot butter whisked into the mix to be released during cooking to help prevent sticking. Get a really, really heavy based 8″ frying pan, a ladle and a spatula. Use a good knob of butter (steady!) to help ‘season’ the pan well, get the pan quite hot and the butter foaming, but not separating and burning (some add a tiny amount of groundnut oil to stop it burning). Add about half a standard ladle in the frothing-buttered pan, tip pan around to coat base or use spatula if mix is thicker. You can get those wooden gadgets that spread the mix evenly, they look like a small version of the garden tool draw-hoes (steady, again). Lift edge after a minute or so to see how it is firming up, if it is beginning to colour, flip, if brave, or turn with fishslice/spatula.

After the first pancake, which usually is a mess [chef’s treat], the others will go well because the pan will now be hot and slippy (masterful innuendo, here…cue Sid James’ laugh). With half a teaspoon of butter melted and frothing in the pan before each successive pancake is cooked, things should go like a production line on continuous heat. Have a Pyrex bowl (or oblong casserole for preference) in a warm oven (with lid) to put the prepared pancakes in (rolled up side-by-side reduces sticking possibilities), till ready to serve: that should keep everything OK for 15 minutes…

If you have any extra batter mix not needed, because everyone’s tum is bursting with pancakes, next day add a couple of eggs to it and make a chunky Spanish omelette or tortilla (pepper and salt and roasted onions, peppers … cooked, sliced new potatoes whatever!), or make a cheeky corned beef fritter or two served with sweet salsa (add a couple of table spoons of beer to lighten the batter, the froth helps). Unless you are a devout Christian when Lent begins and all the flour must be eaten up on Shrove Tuesday. Use quantites according to Delia or Magueritte Patten even with buckwheat…. Erm, that’s it.

PS Are you going to do recipes with ash tomorrow? Or eat your Tortilla in sackcloth and ashes?

Fun fact: The record for the world’s highest pancake toss is held by Dominic Cuzzacrea who got one to the height of 31 feet and 1 inch in 2010.

So what is the best pancake recipe ever?

I just don’t know, I got so many variations when I asked that I had to go and lie down in a flourless room, but this works l for me.

However, Mrs Williams, my friend and surrogate mum who now lives with the angels, had this in her treasure of a cookery book and she can be relied upon for these things.

Anyway, you will need a heavy frying pan about the size of an old fashioned dinner plate, that’s about 20cm rather than the giant dinner plates we get now. The secret to cooking pancakes well is having a red hot pan, that’s why the first one is always a flop, the pan hasn’t reached temperature.I love my copper frying pan for this as it conducts heat like billio, other than that I use my heavy cast iron pan, but I write a risk assessment first* in case of arm strain while flipping.

Mix everything together, except the butter, in a bowl, with a fork. That’s about as sexy as it gets unless you do it naked, which is risky with hot pancakes flying about the place. And now to melt the butter, this is a whole story in itself really as butter tends to go brown over a high heat so you either have to not mind that, which I don’t, or just use a smear of butter applied with a silicone pastry brush (but in light of David Attenborough’s Blue Planet programme silicone pastry brushes should not be made or bought in case they end up inside a whale). But actually if you go for unsalted butter it has a higher smoke point and is less likely to go brown. Other than that you can mix butter and a bit of sunflower oil or you can clarify some butter by heating it in a separate pan until it bubbles and then skim off the bubble bit and use the butter that’s underneath to cook your pancakes.

Fun fact: The biggest pancake in the world weighed 6,614 pounds and had a diameter of 49 feet (I’m guessing it was cooked by Uncle Buck).

So, once you have heated the butter in the pan get a ladle and half fill it with batter, pour it into the pan while tipping this way and that so that the batter thinly coats the entire surface. It has to be thin if you don’t want a big spongy thing. Leave it be for a minute then either flip it while laughing and screeching “OH MY GOD!” or calmly turn it over with a spatula. It should be golden brown on the cooked side. Cook on side-two for another wee while then slide it onto a plate and drench it in fresh lemon juice and caster sugar.

And that’s about a quarter of what I know about pancakes.