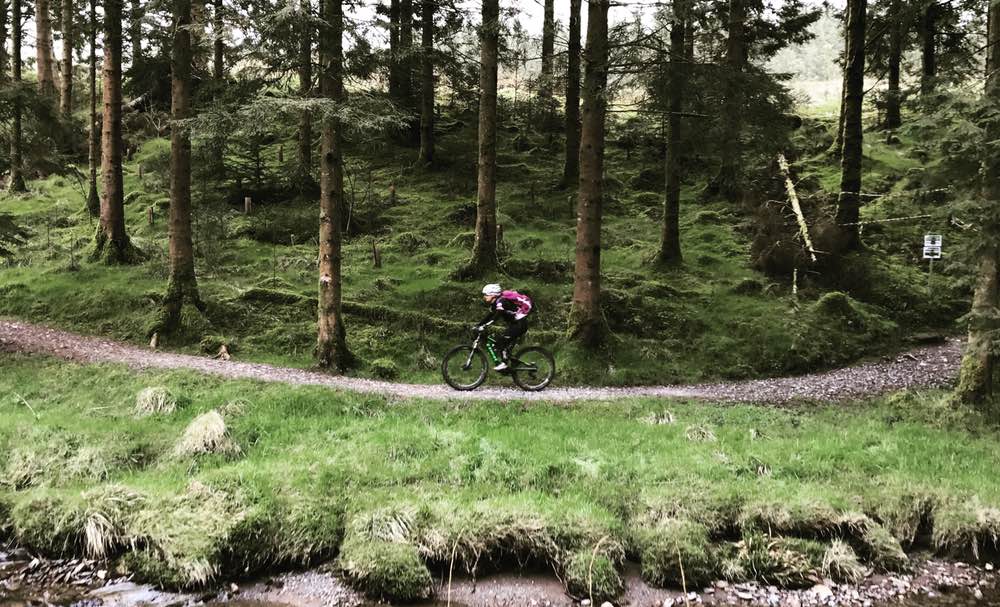 In 2011 Alan Goldsmith (organiser of the Highland 550 race) convinced me to join him and friends to tackle the Trans Cambrian route, there and back in two days. The date chosen was in the middle of June on the longest day of the year in the hope of completing the gruelling 100 miles (each way) of self navigated off-road over the mountains of mid Wales in daylight.

I found it really challenging, having never ridden as far on technical terrain, and pushed myself to the limit keeping up with the experienced male riders. I cant remember how long it took but we made it in daylight both days – just! We were training for Transalp 2011 (an eight day MTB race across the Alps) and I really wasn’t prepared mentally or physically for the size of the challenge! This year I am racing Transalp for the third time, training smarter and reducing my body fat and improving my nutrition with Nuush’s Sports Nutrition plans.

Now, in 2017, it was time to tackle the route again with my partner, Steve, and the the goal was to make it less of a slog, ride faster, pack light and do three shorter days at a good pace.

With a little help from my cat Pippy, who lounged all over the maps, I plotted two off-road days using the official GPS route and maps from IMBA and then an alternative, less technical, route back using mostly Sustrans route 8.

Woken by the sound of sheep in the neighbouring field we were keen to get going after a yummy breakfast in our beautiful B&B Beili Neuadd. We set out from Rhayader towards the Elan Valley.

Rhayader is the oldest town in mid Wales dating from the 5th century; we’ve ridden into the Elan Valley many times from here and up to the dams originally built to supply Birmingham with clean water to eliminate typhoid and cholera.

Soon we realised that a ‘good pace’ was not likely! Conditions were poor with boggy trails, hub-height puddles; stream and river crossings and a farm gate every few metres! The only other cyclists we saw en route were a couple who’d stopped at a stream crossing, throwing their shoes across it, in a vain attempt to keep them dry! Steve charged through the water successfully, and much to the couple’s surprise I followed him, sending a tidal wave towards their previously dry shoes!

A million sheep later we stopped at the Bluebell Inn, the door of which assured us of a 5 star hygiene rating for food, unfortunately the same cannot be said for the rooms! The food however was hearty and the local beer appreciated.

The first 6km included 16 gates and then the rain began. This set the tone for the day. I think perhaps I didn’t notice the gates in 2011 as the majority of the men I rode with were stronger than me so probably got to the gates first, held them for me and then caught me up.

Today’s route was more exposed than yesterday’s and some epic wind threatened to blow us over on the exposed highland; the rain was relentless.

Soaked and cold we rode through no-man’s land, not seeing another human being for what seemed like hours. Steve’s recently dislocated finger became painful and then numb, and after gate 200 and some seriously high gravity grass I spotted the angry face starting to develop. As I rode up behind him on a climb he glared at me and snarled about the creaking noise I was making. I promptly announced very loudly to the Welsh countryside that it was my ‘squeaky fanny’ (actually my waterproof shorts rubbing against the saddle, but not far off!), which lightened the mood and of course led to some rather vulgar conversations about the need to lube squeaky things. At least 20 minutes without a frown followed!

Descending from the top I remembered how I’d been scared in 2011 to ride the loose, steep, twisty, shale slope. I’d seen it marked on the official maps with a warning when route planning and was secretly dreading it. I was delighted this time to ride down with ease, despite the wet rocks and gusting wind. It was a shame to not see the view.

Finally arriving at the packed The White Lion in Machynlleth Steve sent me in to drip over the bar, be stared at by the locals and check in.

Machynlleth became the capital of Wales in 1404 during the rebellion against English rule, but is now famous amongst cyclists for the being the end of the TransCambrian ride, the Mach MTB trails and the pizza.

Having shown Steve the maps over beer in the Bluebell Inn and our route along the river to return to Rhayader I thought he was aware there might be a few bumps on the way back, but the assumption was made that following the river was fairly flat. So the ‘mountain road’ that leaves Machynlleth to climb from sea level to 550m in 10 Km was therefore a bit of a shock. Another sense of humour failure was averted with the reminder that ‘normal’ people are out shopping or doing DIY on their Easter Weekend and that we were lucky enough to be here!

Climbing back into Hafren Forest we paused to look for Ospreys and refuel on Stoats Bars, these had been recommended to me by Nuush and are brilliant bike fuel.

The rest of the return leg could be described as relentlessly undulating, but only 4 gates were encountered on the whole return journey – a result!

Although it wasn’t as fast as planned due to the conditions, the shorter version of the route was much more fun; it was relatively easy to navigate and the paper maps remained in the bag. It does cross some remote areas, so do make sure you are adequately prepared, but I would highly recommend it, a brilliant three days of riding and training.

Need to get lean and mean for an epic adventure? Join Nuush and get a fit meal plan every week!

Get your nutrition fully dialled in with our bespoke Sports Nutrition plan for improved performance, sport-appropriate body composition, robustness and fantastic health.