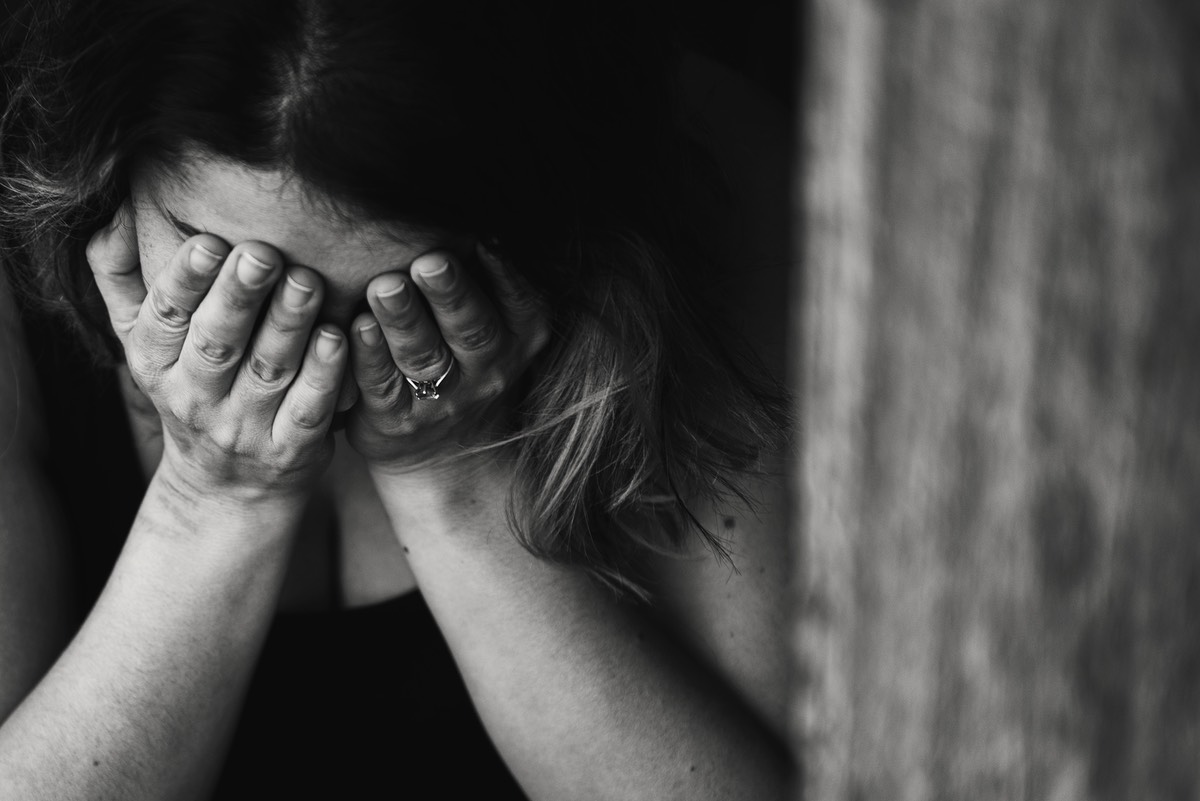 Rachel is a highly intelligent, confident and sociable woman in her forties, with a successful career and a loving family. She stands in the queue of the local petrol station with her basket. The petrol station is the preferred choice as she is unlikely to bump into someone she knows and yet it is most definitely a “no fuel” day.

She throws a furtive glance at her basket not wanting to acknowledge its accusing contents, but does a quick mental check anyway. It’s always a cheese and onion sandwich as it has the pappy white bread factor, the gooey filling and no salad. Crisps of course, but not those exotically flavoured gourmet ones or those vegetable ‘pot-pourri’ types; no, it has to be the cheese puffs in all their vivid orange glory with memories of childhood parties released as they disintegrate on the tongue. Some sausage rolls are thrown in there too, but hey, they are hog roast gourmet ones; she doesn’t want to dumb down her basket too much. At least that counts as ‘lunch’. After all, it’s what millions of people take to work every day.  However, these babies are just the warm up act.

Chocolate is the headlining act. She is concerned how too many chocolate bars will look in the basket so she has popped in the box of Celebrations as she could, of course, be going to visit a friend. There are a couple of smaller bars in there as it is just not right if there is not a Dairy Milk or a Galaxy bar in the line-up and she needs something in reserve for later that day.  A bag of Percy Pigs adds a pop of glorious technicolour and will serve as an amuse-bouche on the drive home.

She has carefully selected some fruit and vegetables and added a few essentials like bread and milk.  She knows she will be in no state to whip up a nutritious dinner that night so she has popped two ready meals in the basket (good quality of course). Spaghetti carbonara is de rigueur.  She will knock up something healthy for the kids.

As she stands in the queue she feels the familiar paralysis. She knows she has a choice, she knows she can change the course of a day in that moment, but she can’t; she is committed. The deal has been done even though she can’t even really remember how she came to be standing here with this basket. The panic rises, the tears flicker and she hands the basket to the cashier. Game on.

At home, alone of course, she upends the booty on to the counter. This food does not merit careful unpacking. The bag of crisps is torn open whilst she is putting everything else on to a plate (a nod to civilised society in the midst of this far from civilised moment). She grabs a magazine to distract herself from the reality of what she is doing and methodically eats the food. Time becomes distilled to this moment and the familiar trance-like state envelops her. There is no point in discerning taste or texture. All she feels is numbness, a blessed release from feeling, stuffing down those feelings with every bite, until it ends of course, when she feels again; brief relief turned to shame and frustration and physical discomfort. Food as weapon turned against herself.

Once out of the fug she springs into action, meticulously clearing the evidence of her binge eating disorder; empty packets hidden artfully under more mundane rubbish in the bin, any leftover chocolate secreted into a handbag for clandestine pickings later to help her deal with the inevitable sugar crash. She is feeling again now, disgusted with herself, screaming inside and feeling battered and bruised by forces that she feels utterly at the mercy of but cannot explain why.

Tomorrow is another day. She steps out of the door and back into life.

Recognition of binge eating as a disorder

For a long time, binge eating disorder was not officially recognised. In many ways it could be seen as the poorer cousin on the disordered eating spectrum. With anorexia, the physical symptoms are all too apparent. The purging element of bulimia leaves visible signs and noticeable behavioural changes. Binge eating, however, is far more under the radar. Whilst the weight of the binge eater may fluctuate, so does the weight of many people not suffering from disordered eating.  There are no other obvious physical symptoms.

In today’s language, ‘bingeing’ is something light-hearted: people “binge watch” the latest box set, they have a “binge fest” of their favourite food or “pig out”.  It’s broadly seen as a bit of harmless over-indulgence, a sign that we’re all fallible humans and not robotic juicing-faddists. No wonder then, that trying to open up to friends or family about bingeing is a daunting and uphill task for sufferers.

According to the Binge Eating Disorder Association in the US, the ‘condition’ was only recognised separately from bulimia in 1994 but even then it was listed in a group classified as ‘Eating Disorders Not Otherwise Specified’. It wasn’t until 2013 that it was finally categorised as its own distinct disorder.

This is reflected on the website of the UK eating disorder charity BEAT, which not only lists BED as a disorder alongside anorexia and bulimia, but now also has a separate category of ‘Emotional Overeating’. BEAT recognise that binge eating and emotional overeating have elements of crossover but there is distinct difference. Binge eating involves an unusually large amount of food being consumed during a binge; emotional overeating is more turning to food to comfort, soothe and deal with emotions but not in the same quantities.

It’s hugely encouraging that BEAT have sought to make a distinction and that they give prominence on their website to these issues whilst recognising the huge range of factors that come into play.

Characteristics of the disorder

One of the overriding characteristics of binge eating or emotional overeating is the huge sense of shame surrounding the seeming loss of control around food. In a society that lauds high achievers it’s no wonder that those prey to forces they don’t understand feel weak, greedy and lazy; not at all reflective of who they actually are.

All too often those who try and open up about their issue, a huge step in itself, are misunderstood. How many times have they been advised by well-meaning family or friends to, “just eat less”, “don’t think about food”, “don’t have chocolate in the house”. They’ve tried all those things and still find themselves, like Rachel, standing at the petrol station with a basket of hurt, unable to remember even driving there. Sufferers of binge eating disorder do not take pleasure in the food they eat during their episodes. They’re not merely ‘overindulging’.

Other features of the disorder:

As mentioned earlier binge eating on a sustained level can lead to weight gain (though not always the case) but it can also lead to high blood pressure, type 2 diabetes, high cholesterol and heart disease.

It’s often accompanied by low self-esteem, depression and anxiety; whether those are the issues that lead to the bingeing or whether the episodes engender those feelings is open to question. Either way, significant mental issues arise that need to be dealt with.

Now it’s recognised as a serious mental illness there are appropriate therapies which help tackle the issue and, in particular, the thoughts and feelings giving rise to the behaviour. In this regard, Cognitive Behavioural Therapy (CBT) is widely used, as are other talking therapies. There is also a wide network of support and self-help groups where people can share their experiences if they feel comfortable doing so, and these serve to reduce the feelings of shame and isolation felt by so many.

It can be extremely difficult to get professional help, certainly on the NHS, and the cost of private therapy prevents so many people from getting the support they desperately need. Talking to your GP, and really getting them to understand and embrace the problem should always be the first step. Keep going back until you’re taken seriously. Try to find someone close that you can talk to, trust and confide in, even if they’re not a professional they can listen, and that will help a great deal. Contact BEAT for more specific advice.

The future for sufferers

When I consider Binge Eating Disorder, I can’t help but think of Edvard Munch’s ‘The Scream’. People are screaming silently in mental pain as they cram in food to self-medicate, and they need to be heard. But sadly binge eating is drowned out by the latest celebrity tales of drug, alcohol and sex addiction. Eating the contents of Greggs does not engender the same reaction as the latest celebrity shock fad-weight-loss story

This is the year when mental health has taken centre stage and the stigma around talking about it is reducing, as it should. Those suffering from this particular disorder need to feel they can talk openly and be taken seriously. Just because they don’t display any outward scars of suffering does not mean they are not.

If you have binge eating disorder please don’t give up, always know that you are not alone, others are suffering in silence just like you. Talking about it is hard but the more we talk about this the more help will become available.

If you would benefit from a framework of nutritious meals please take a look at our nutrition plans.*