I found some photos on my computer and, despite having lived through it, I was shocked by the change I saw.

So this is a testimonial for anyone who might be sat, looking at fitnaturally, thinking about getting in touch.

Plan: Nutrition for Everyone 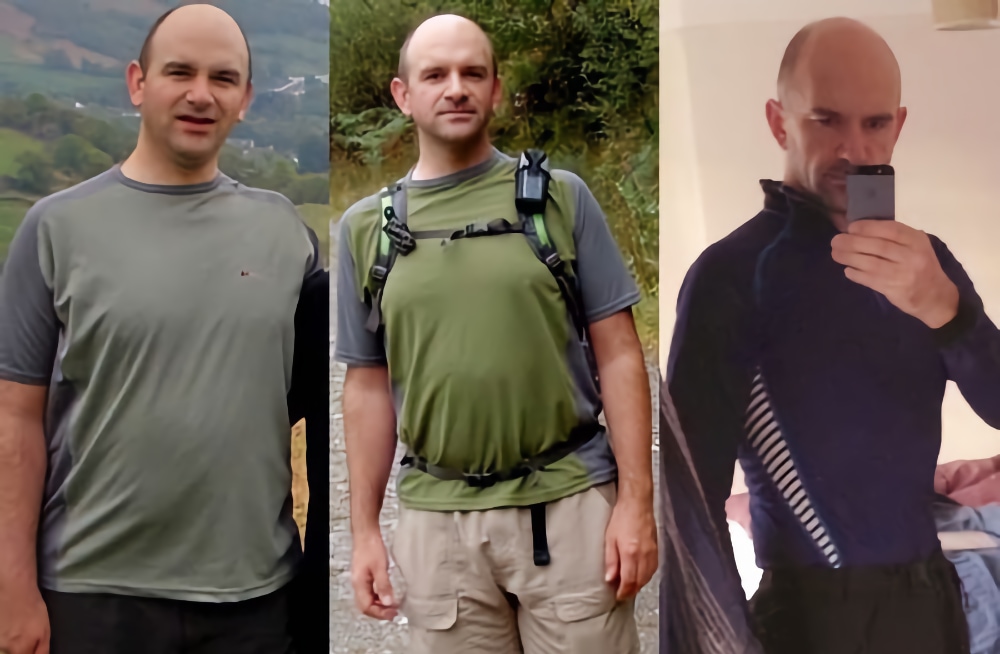 Before
The first photo is late 2008 and when I was at my heaviest. I’d been that weight for a year or so, was working as an engineer travelling around Europe working long hours and on quite a generous expense account. Although I’d kicked the video game addiction, I did no exercise to speak of and ate whatever I wanted and usually washed it down with large quantities of quality beer. When my 38inch waist jeans became too tight to fasten the button and walking up the stairs at home had me out of breath, I knew something had to change.

Being a bit of a nerd, I decided to treat it like any other problem and first, did some research on the internet. That lead me to a wonderful (if slightly simplistic) book called The Hackers Diet. Following the advice within, which made total sense to my engineering brain, I started to analyse how much I was eating at each meal, which was a lot! As an example, breakfast consisted of healthy cereal, right? Only, a ‘recommended portion size’ was 45grams and 252kcal … yet, my hastily poured bowlful was around 120grams and therefore a whopping 672kcal! And then you’d add the orange juice … and maybe a slice of toast? Mental. So, I started to weigh out and reduce portion sizes to fit my daily meals within an 1,800kcal per day ‘allowance’, which I’d decided on based on my (lack-of) activity level.

During
Fast forward to the next photo which was around late 2009, I think the weight is about right. I’d lost a fair bit of weight without exercising and I was still only restricting calories; so burgers, pizza, beer, biscuits and crisps were all still on the menu, just less of them and less often. However, I was down to a 36inch waist size (just about) and my XL sized clothes started to go in the bin and I was buying L sized stuff to replace them.

Almost another year later (around August 2010 although I couldn’t find a suitable photo) and I’d got down to around 14st 4lbs. By this point, I was feeling much better so had started exercising on a regular basis (mainly mountain biking but the occasional cross-training class as well) and my simple diet of an 1,800kcal limit was being tested as the extra exercise saw me getting hungrier and hungrier but I’d hit a wall somewhere because I wasn’t loosing any more weight.

So, late 2010 and early 2011 were spent with me frustrated, stuck at 14st 4lbs and going nowhere. My ‘diet’ didn’t seem to be working anymore, I wasn’t loosing any more weight and I was hungry a lot of the time. I started eating more to cover the cravings I was getting post-exercise and my weight just seemed to be stable, neither up nor down. After a while I started increasing the amount I ate pre-exercise as “I obviously needed the extra calories” and gradually, over the course of 8 months or so, I gave up on the ‘diet’, returned to eating whatever I wanted and relied on the fact my exercising would keep my weight in check. When late 2011 saw my life change again as I became single and began living alone it brought more take-away food, eating out and even poorer food choices.

Fast forward to mid-2012 and I’d had enough. My 40th birthday was rapidly approaching, I was sleeping terribly, getting spots like a teenager and despite the fact I was doing loads of cycling my weight had crept back up to 14st 10lbs!! I’d put on half a stone and was going the wrong way! That’s when, after talking to a couple of friends who had used fitnaturally, I took the decision to get in touch with Sally.

My aim was what I thought was ambitious but achievable. I was hoping to get down to a weight of around 13st 7lbs so when Sally suggested a goal-weight of 13st, I thought she was dreaming. I couldn’t possibly get to 13st could I? I was 12 and a half stone when I was 21! Despite Sally’s confidence and reassurance I couldn’t stop thinking about the 12 months plus that I’d spent hungry, annoyed and stuck at 14st 4lbs and wondered how the hell I was going to get past that barrier. However, starting the eatnaturally plan was to turn out to be one of the best things I’ve ever done for myself. Results were instant, within two weeks I’d dropped a healthy 4lbs! The food was tasty, filling, simple to make, healthy and best of all, I had no weird diet-type hunger pangs or cravings! In fact, in the beginning I was pretty shocked at how much my little plan was telling me to eat. Rather than going hungry, I was having to skip the snacks listed in the plan as I was just too full. Everything seemed to take around 20 minutes to prepare, tasted amazing and I was continually dropping one or two pounds per week! It all seemed too easy and before I really knew it, the 14st 4lb barrier came and sailed past without incident and nary a hunger-pang in sight.

After (or is it?)
So, it’s now 6 months after I started on a sensible eating plan, I don’t like to call it a ‘diet’ as that sounds temporary and this is a permanent change to a tastier and healthier way of eating. It required no changes to my exercise routine and even with a couple of dietary faux-pas along the way (nobody is perfect, especially not me with my love of pizza) I’ve dropped the same amount of weight in 6 months that took me over a year to do before! My sleeping has improved (despite my job’s best efforts), my spots have cleared up, my 34inch waist jeans are loose fitting, I’m down to a size M in tops or fully-fitted shirts and I’m within touching distance of a sensible goal-weigh

The last pic in the series was taken this weekend in my new skintight (size M) base-layer that previously I’d have been terrified to wear. I’m 13st 1lb and in the best physical shape I’ve been in for over 15 years, although I’m not finished just yet. If looking at these three pictures proves anything to me and hopefully to you as well, it’s that when it comes to your own body, anything is possible… and I quite fancy a rock-hard set of abs   So, if you’re sat there thinking that you should make a change, that you’re not in the body you want to be in… DON’T WAIT. DO IT NOW! Change yourself! YOU CAN DO IT! 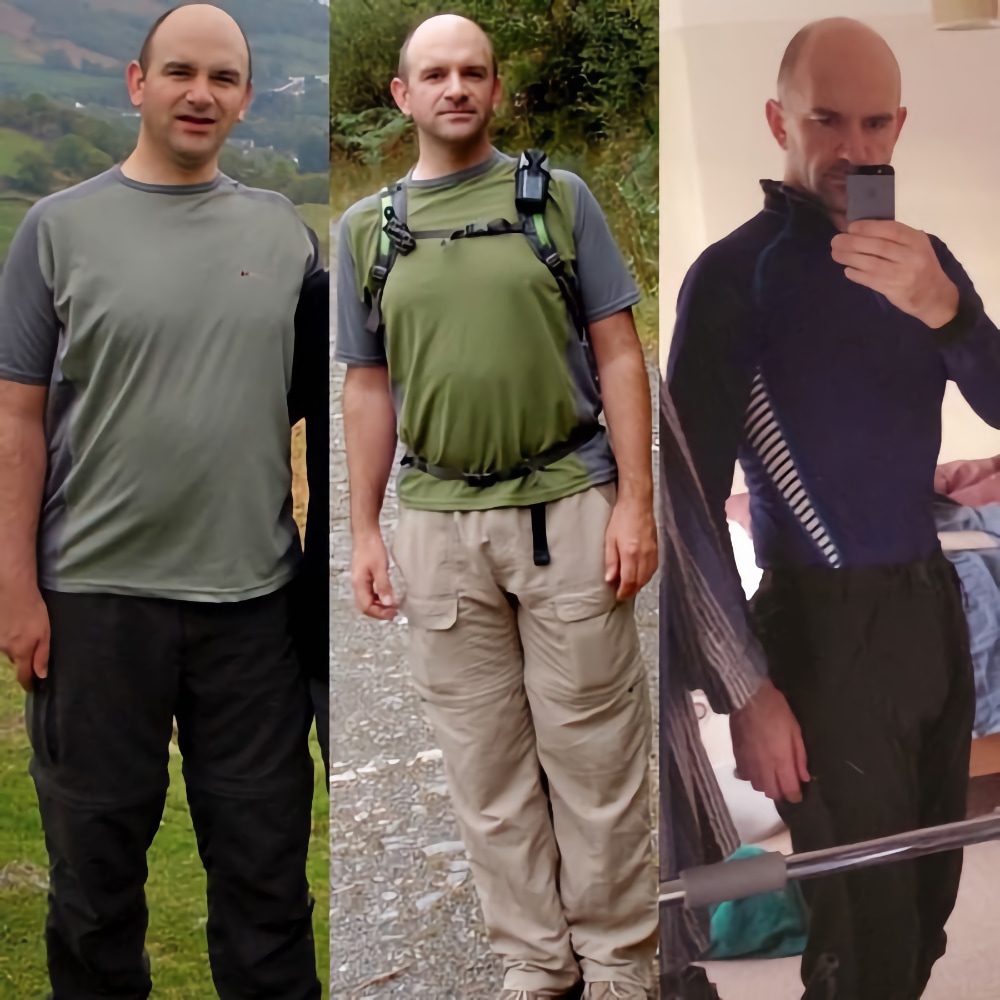 Get started with this plan